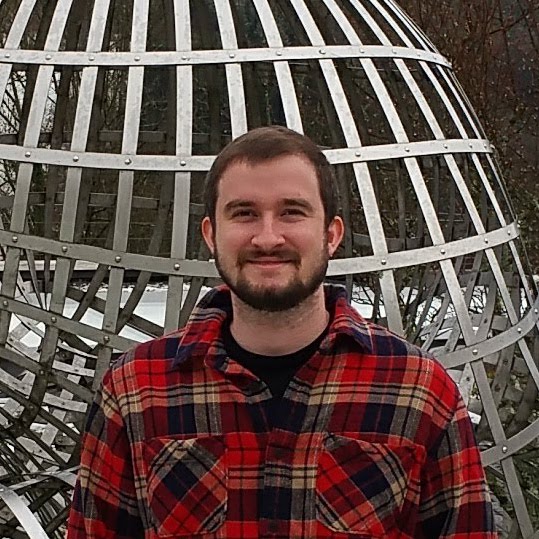 The tangent variety to the twisted cubic

The twisted cubic curve is a famous example (and counterexample) in algebraic geometry, usually described parametrically as image of the map \(\vec{r} : \mathbb{P}^1 \rightarrow \mathbb{P}^3\) given by

though typically for visualization purposes, we’ll restrict our attention to the affine patch where \(s \not = 0,\) where we have the more familiar parametrization \(\vec{r} : \mathbb{R}^1 \rightarrow \mathbb{R}^3\) given by

To start, we’ll need parametric equations for the twisted cubic and it’s tangent vector. The model we’ll eventually be making will be bounded by the cube with vertices \((\pm 1, \pm 1, \pm 1),\) and we’ll be making this model out of cylindrical tubes of a fixed radius \(\epsilon,\) so we set up a region function and a choose a parameter accordingly.

For the twisted cubic itself, it’s straightforward to make a parametric plot.

Instead of plotting the tangent variety itself as a surface, we’ll instead plot a dense collection of tangent lines. For a fixed value of \(t,\) we get a tangent line to \(C\) is parametrized by

We use this to create our collection of tangent lines.

When we inspect what we have so far, we see that the curve together with this collection of tangent lines has some disconnected pieces, so it isn’t yet suitable for 3D printing. 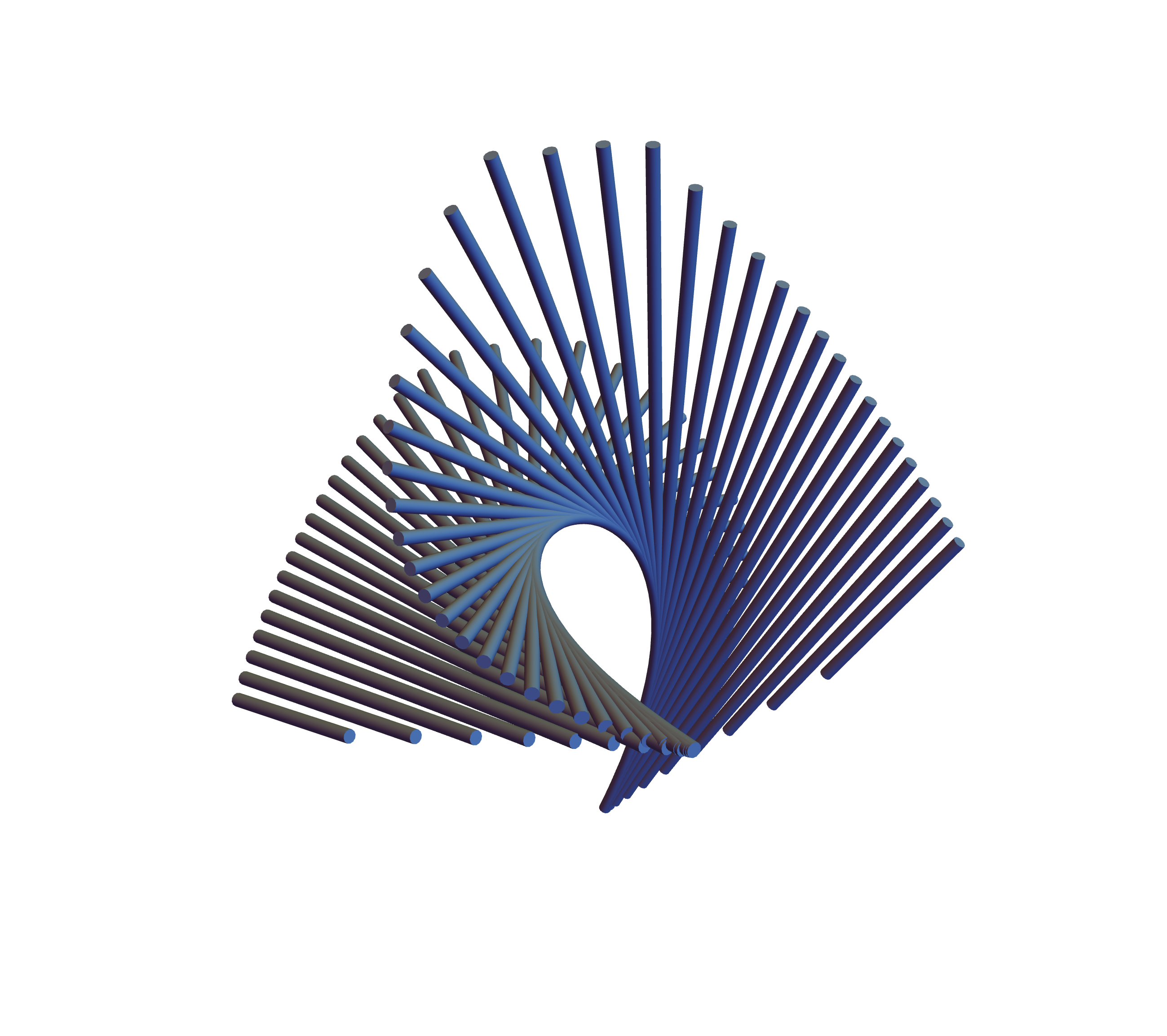 To find the intersection of this surface with the faces of our bounding cube, we’ll set \(x,y\) or \(z\) equal to \(\pm 1,\) set the resulting expression equal to zero, and solve for one of the remaining variables.

What we get can be used to parametrize the different components of the intersection of the tangent variety with the bounding cube.

At the intersection points of these various facecurves, there’s a bit of artifacting we’d like to avoid, which we accomplish by covering these intersection points with a sphere of radius \(\epsilon.\) That way, the corners will be smooth instead of looking like two overlapping cylinders.

The model we want is comprised of the twisted cubic curve, the collection of tangent lines, the curves of intersection between the tangent variety and the bounding cube, and these small corrective spheres. 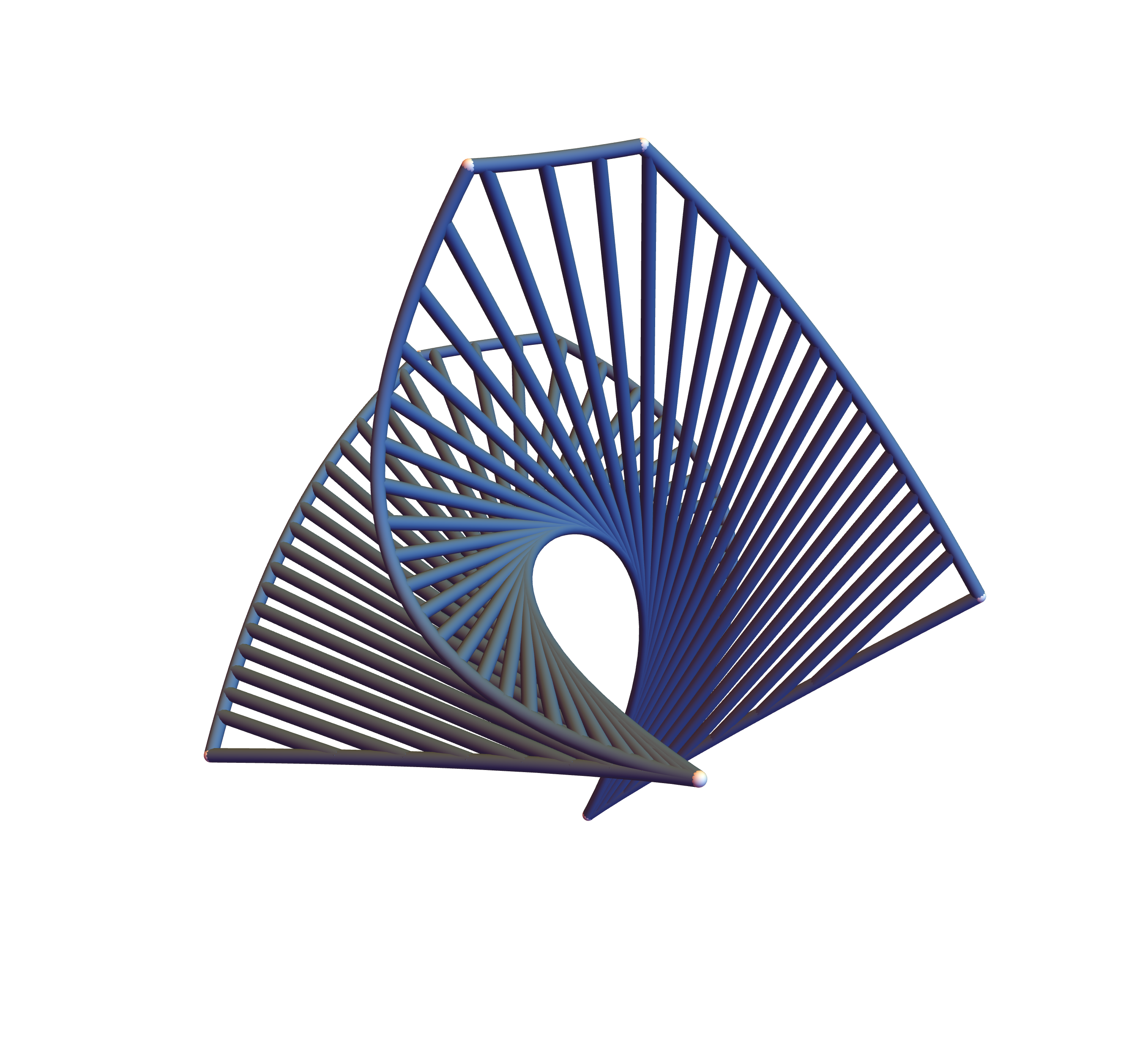 This can be exported to an stl file and 3D printed. (put picture here). It can be hard to understand what object looks like from a static picture, even a picture of a physical object. So for the purpose of this post, here’s a .gif made of a parametrized family of different views of the model.

27 lines on a cubic suface

This is a summary of a project Sean Grate an I worked on, using Sage and a 3D printer to make a model of the Clebsch diagonal cubic and its \(27\) lines.

It is a classical fact from algebraic geometry that any smooth cubic surface contains exactly \(27\) lines, and furthermore that there exists a cubic surface for which all these lines are visible in the real locus with a high degree of symmetry. The precise statement of these facts requires some care and some more precise terminology, which I won’t go into here, but you can read more on wikipedia here or here, or in this pair of excellent posts here and here, or in the book The Geometry of some Special Arithmetic Quotients. The relevant facts can be summarized as follows:

and in a suitable affine patch, this surface can be visualized in \( \mathbb{R}^3 \) as the graph of the implicit equation

and all of the \(27\) lines will be visible on this graph and can be described by explicit parametrizations, see here for details. If the line passing through \((a,b,c)\) with direction vector \((d,e,f)\) is contained in this surface, we add the list of parameters [a,b,c,d,e,f] to the linedata list, shown here (full list suppressed)

Creating an .stl file with Sage

The implicit equation of the surface, together with the lines it contains, is all we need to produce an .stl file for 3D printing our model. Of course, there already exist many 3D printed models of the Clebsch diagonal cubic, including various models which accentuate the \(27\) lines in various ways.

Some models use color, or embossed the lines on the surface itself, but we were particularly interested in models which displayed only a thin ribbon of the surface, together with the \(27\) lines printed as a collection of cylindrical tubes, like in this example. Inspired by this model, our aim was to produce a 3D printed object in the same vein, but with two main differences: We wanted our model to be bounded by a sphere, and instead of printing the lines as a collection of cylindrical tubes, we wanted to show the lines by printing a thin strip of the part of the surface which surrounds each line.

This can easily be done with the Sage implicit_plot3d function, for which the region option lets us plot only the points for which a specified boolean condition is satisfied. For example, we only want to see the points on the Clebsch diagonal cubic which are inside a sphere of radius \(R\), and which are either within \(\epsilon\) of one of the \(27\) lines or are outside a sphere of radius \(r\), for some reasonable choices of parameter values.

And to incorporate this region function while making our sage plot:

From a Sage object to a physical object

To make an .stl file, all that’s left to do is surface.save('path/to/file.stl'). Since this object has no thickness, it is not yet suitable for 3D printing. We first used Blender to solidify the mesh, resulting in something like this: 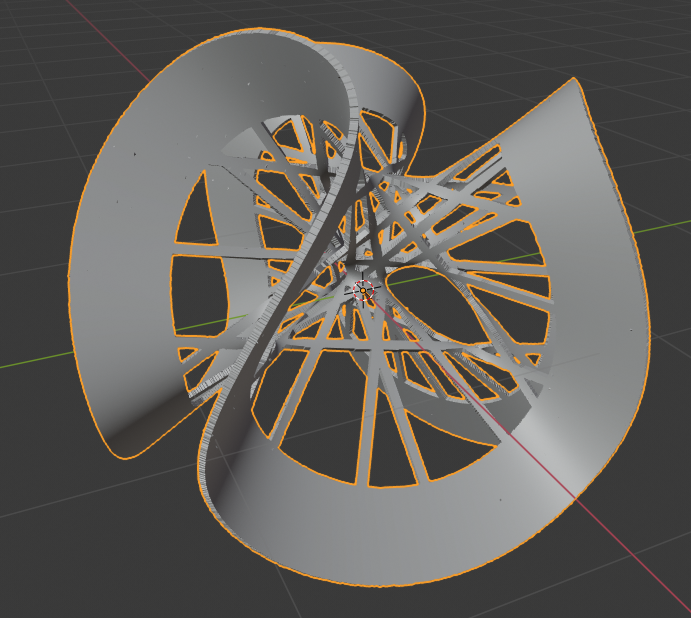 We sent the .stl file for the thickened surface to the Form 2 printer at the University of Kentucky Math Lab, and after a 23 hour print and some careful support clipping, this was our final product: 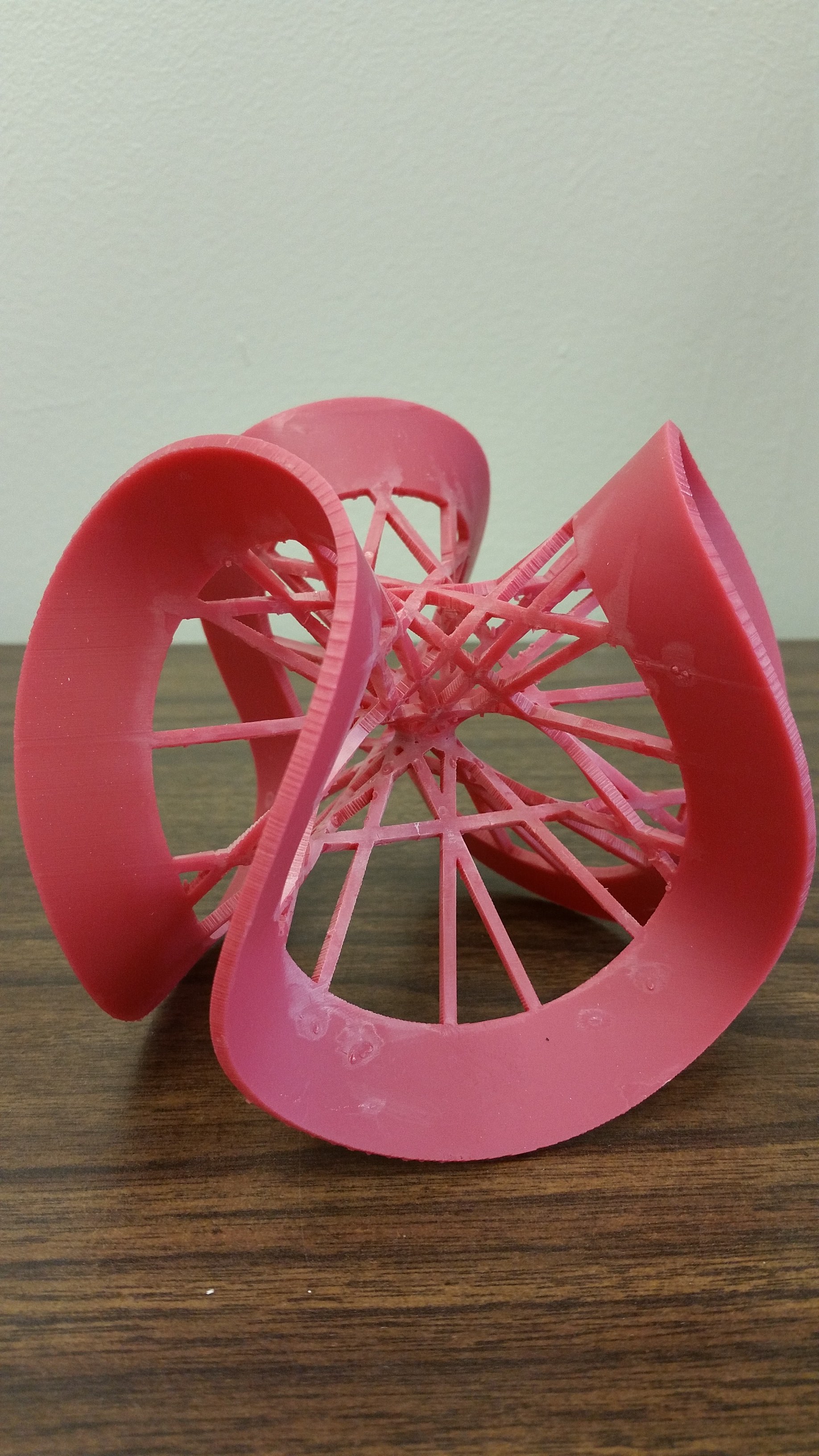 We’re quite happy with the results, since it accentuates the pieces of the surface that contain straight lines, while still showing the local twisting of the surface around those lines. This model now has a home in the display case in the math department at UK.

The Math Lab at the University of Kentucky has a group which visualizes mathematical ideas through quilting, with projects involving partitions, hyperbolic tilings, and prime sieves. One idea for a quilting project, originally suggested by Dave Jensen, was to create a quilt representing the Cayley table for the symmetric group \(S_4\) to exhibit its flag of normal subgroups. This post describes implementation of that idea using Mathematica.

The Cayley table of a group is just a multiplication table for the group operation. If we form a naive Cayley table for \(S_4\) using the default ordering of the elements given by Mathematica, and encoding the elements using a built-in color function, then we don’t expect to see much of the structure, but it’ll show us our starting point. 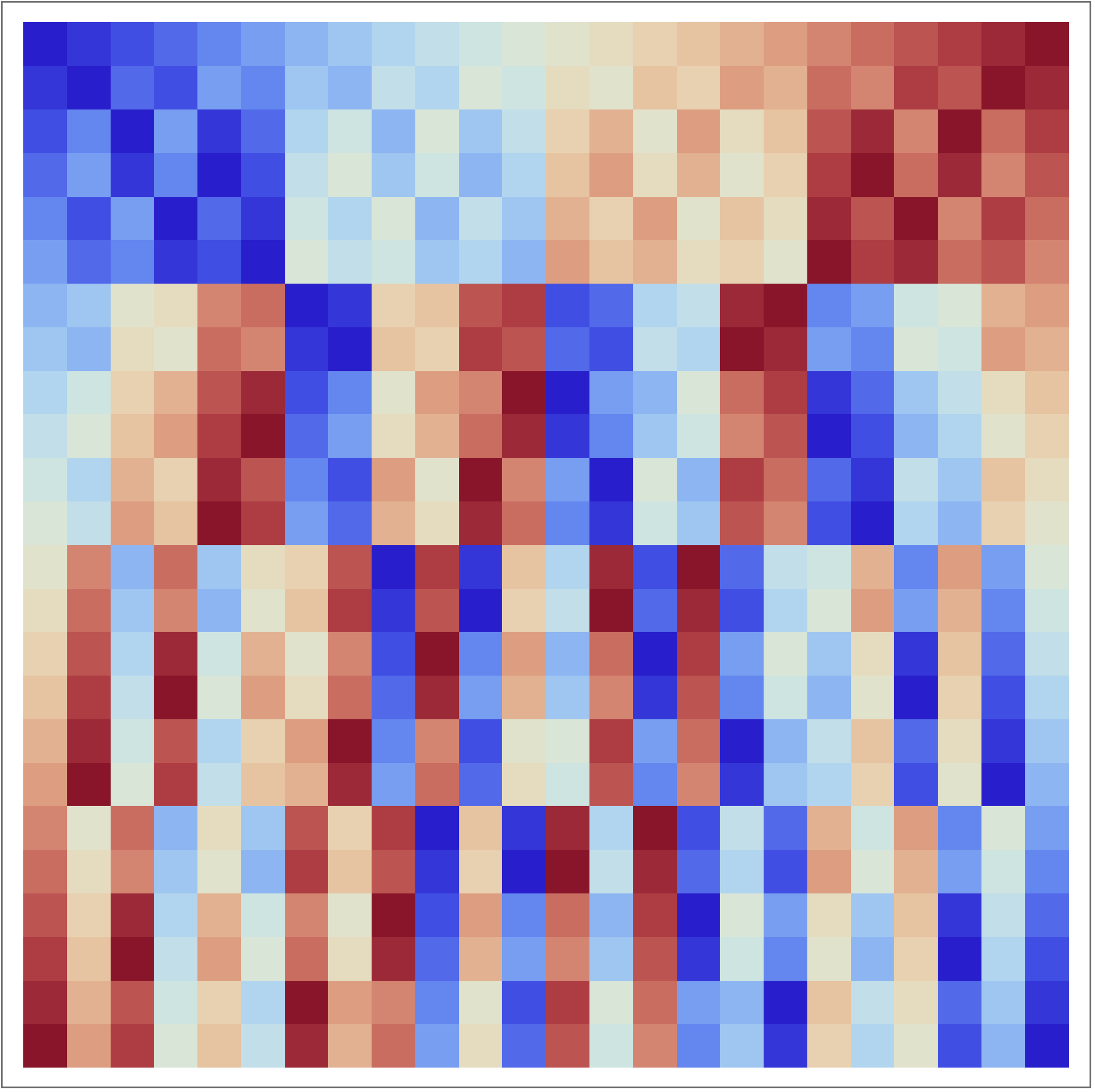 This Cayley table seems to have some structure, especially in the way that the top six rows look like they’re organized by color into squares. Explaining this takes a bit of additional effort to figure out exactly which elements of \(S_4\) have been assigned which colors. We generate a list of elements of \(S_4\), written in cycle notation and backed by their Mathematica-assigned color. Note that since the first element of \(S_4\) is the identity permutation, this is also a description of the topmost row and leftmost column in the Cayley table.

Note that for the built-in ordering of \(S_4\), the first six elements are the subgroup \(S_3 \leqslant S_4\) of permutations that fix \(1\). Since subgroups are closed under multiplication, this explains why the top-left \(6 \times 6\) square of the Cayley table only uses the first six colors from the above list. After staring a little longer, we can also note that the \(7^\text{th}\) through \(12^\text{th}\) elements are exactly the left coset \((12)S_3\), the \(13^\text{th}\) through \(18^\text{th}\) elements are exactly \((132)S_3\), and the last six elements form the last coset \((1432) S_3\). This explains why the first six rows of the Cayley table form what appear to be four distinct squares: The left cosets of \(S_3\) are fixed, but permuted internally, by right multiplication by an element of \(S_3\). Additionally, we observe that each column in the Cayley table seems to consist of four distinct strips: dark blue, light blue, dark red and light red, in some order and internally permuted. This is because left multiplication by an element of \(S_4\) permutes the left cosets of \(S_3\).

However, right multiplication does not preserve the left cosets of a subgroup, unless that subgroup happens to be a normal subgroup. This leads us to our process for making a Cayley table that represents the flag of normal subgroups. We want to re-order the elements of \(S_4\) so that the first four elements form the subgroup \(V\), and so the rest of the list is sorted into the five left cosets of \(V\). Furthermore, we want the first three cosets to comprise the elements of \(A_4\). This accomplishes a partition of the elements of \(S_4\) into the two cosets of \(A_4\), which are further subdivided into three cosets of \(V\) each.

The index list idx is itself a permutation, which tells us how to re-order the elements of \(S_4\) for our purposes. Inspecting idx we see:

Looking at our re-ordered list of elements of \(S_4\) with this new color palette, we see that it more or less accomplishes what we set out to accomplish.

Finally, making a new Cayley table for \(S_4\) with this color palette and element re-ordering, we end up with this: 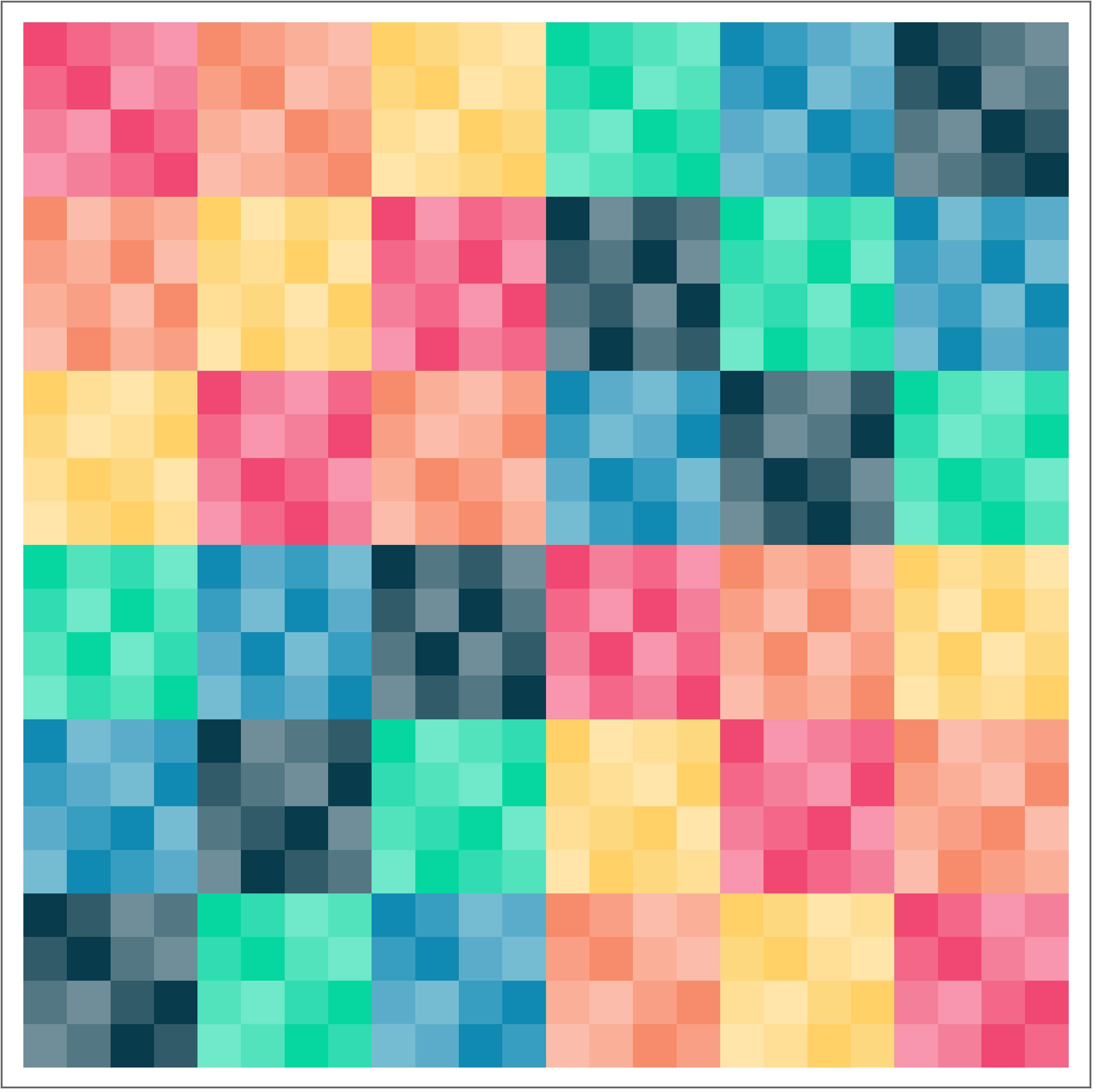 Update (early 2020): The 2D visualization group in the UK math lab is working on a quilt based on this design, and they’re making fast progress. Their work might one day be displayed at mathematical art exhibit at the JMM, like their partitions quilt was this year.